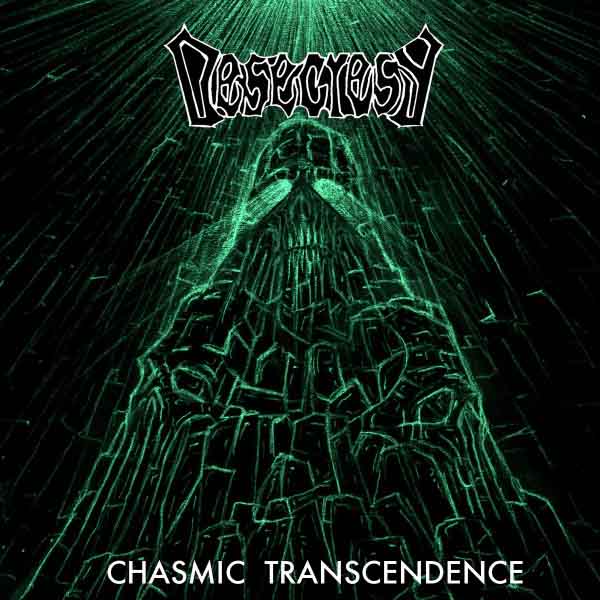 What the mature music of Desecresy (by which I mean their work from this album onwards) offers to the veteran audience more than the neophytes is an exquisitely refined Finnish death metal. Refined here carries connotations of trimming away all but the indispensable and, simultaneously, a multiplicity of meaningful, rather than transitional, passages. Chasmic Transcendence manages to be both atmospheric and ambient throughout its playtime while maintaining a constant stream of information in the form of proper metal. It does not avail itself of space or overabundant repetition alone to bide time and induce a state of mind. The price for this is that it must maintain a fairly uniform texture and pacing, while consistency of mode and style being a given as becomes respectable traditional underground metal.

“Rot of the millenia
In Furnace of Reformation
Memories lapse in whirling Deep
entities of the Past washed away
delivered.”
— V. Cyclonic Mass Consumptor

Conceptually, Desecresy is incredibly focused to the point of giving a false illusion of overall minimalism. Visual artwork, lyrics and music conspire to project a clear image in complimentary pieces. This image is a sign and symbol. The picture is cold, dark, vast, cosmic on a scale beyond the wildest dreams common mankind. Only vague shadows, ripples over the waters of matter, shapes of old and powerful beings beyond good and evil. Events and characters that dwarf our petty existences to nothing. To fully understand the nightmares and crazed visions herein portrayed, an acquaintance with an inverted gnosticism seems helpful. Here lies great death metal. This is the ritual area, where music is a vehicle for holistic human-cosmic experience and perception.

“Pillars reaching down
from Nebulous Mist
where the lack of Light
grows ever thicker.
Every brief moment
passed down
where Shadows
reach the weary feet.
From corners indistinct
Mass of Total Isolation
Endless Drift of Frigid Fog
carries on to pass the sentences
far from the past denied.”
— XIII. Infinite Halls

From the point of view of structure-building, Desecresy crown themselves masters of their art here. Chasmic Transcendence is a laboriously wrought mansion with extensive gardens, enameled with sympathetic bits of precious stone that connect to each other by their very nature, as melodies of music which by motific alterations belong to a same root. These are the first to reach the conscious mind. Then come expertly masoned rock and stone, overgrown with organic masses living and breathing in multitudinous harmony. This indestructible foundation would seem to emanate the rest, or emanate from the rest. In truth, all of the instruments in their different functions and apparitions in space-time are so synchronous with each other that they become that sort of musical living entity that all transcendent music aspires to create. In doing so they occupy a same abstract space, working as different spheres of concentration in a morbid Tree of Death.

Listen below and purchase the CD from Desecresy’s Bandcamp page.