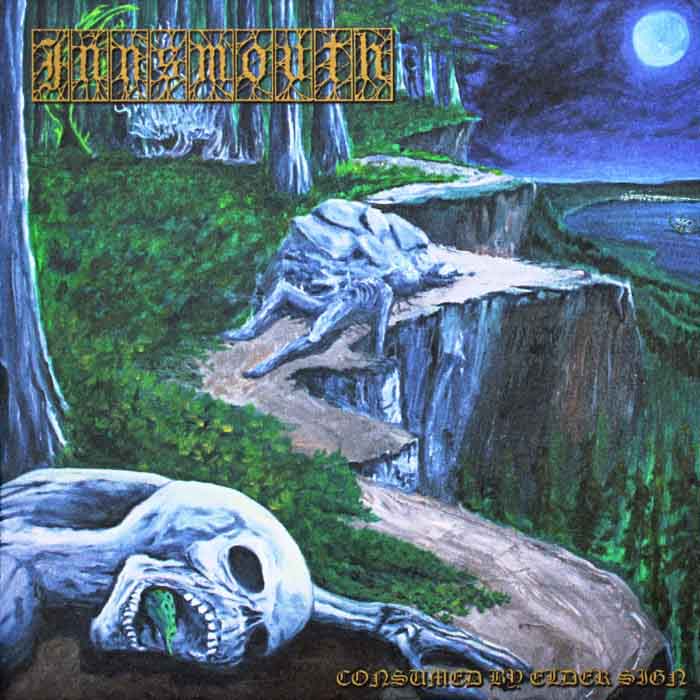 Unlike say the music of Demilich, the existential horror of chaotic but organized alien beings, worlds, and structures is not reflected in the actual music or structure thereof either. Consumed by the Elder Sign songs typically alternate between two differently styled riffs in a verse-chorus-verse fashion before a bridged with a guitar solo signals the arrival of new verse and chorus riffs sometimes related to the earlier ones. While a few of the tremolo-picked black metal riffs are very strong and driving, the inclusion of the other riffing styles in most of the songs is problematic. Galloping heavy metal polka riffs that could be on an Unleashed album scream out for accordion leads instead of black metal ones. Furthermore these songs are long and repetitive with not enough variation to the riffing in whatever style. Nevertheless, some of these riffs are strong and Innsmouth could’ve made the material on Consumed by the Elder Sign into an effective EP by cutting back on the heavy metal rhythmic tributes and working on further progressing the melody displayed in the effective black metal riffing rather than only coming back to those few riffs that actually work three minutes later with a slight variation by which time the audience is actually slightly bored. Listening to Consumed by the Elder Sign repeatedly is a chore.