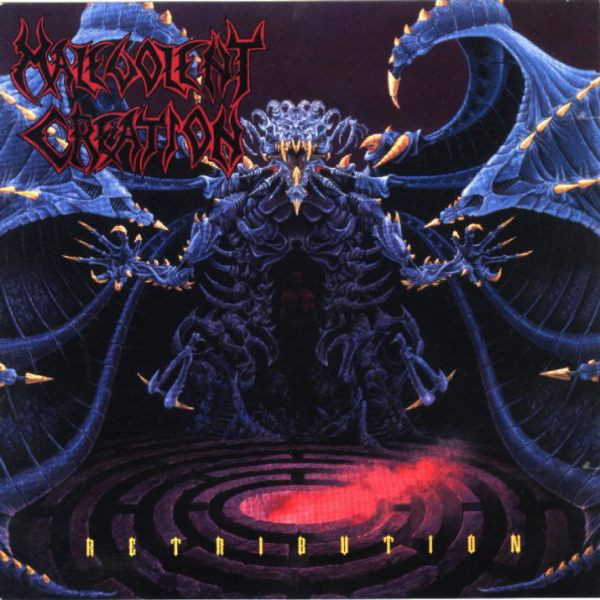 Malevolent Creation have never reached the relative popularity of their Floridian peers, and neither have they received the same degree of recognition. The band members moved from New York in order to follow their dreams of metal stardom, yet they never saw even a quarter of the admiration that Cannibal Corpse and their brand of deficient death metal received. For a short while Malevolent Creation were a band displayed unlimited potential within their percussive style combined with primitive caveman-esque melodies, but they never reached the summits of Deicide, Morbid Angel, Obituary and Monstrosity. The band would eventually fade away due to constantly changing members, drug related stories and the inability to build upon previous works.

The first effort, The Ten Commandments, saw the young band combine the speed metal of Dark Angel, the percussiveness of Exodus and early Slayer in creating an ambitious album that veered on labyrinthine death metal structure but lacked cohesion in conveying the themes of urban violence that have separated them from their peers. On Retribution ,which is their most focused album and their closest effort to a transcendental record, still sees them fall short due to the reliance of syncopated speed metal riffs and, at times, random arrangements which fail to give the melodies the proper platform to express themselves. Stillborn would mark the death of this band due to label pressures, problems in the recording studio, two-riff songs and no effort from any of the musicians. Though later albums would emerge, they have all been plagued by insufferable mediocrity, being overly derivative of past glory.

Possessing some of the best sound produced by Scott Burns and Co., Retribution gives space a large amount of space to each instrument. Vocals take center place with very little modification, capturing the vitriol in Hoffman’s voice yet are multitracked with subtle pitch shifting during pivotal moments. Guitars use a polished tone left over from the speed metal bands but pierce particularly well through the mix with restraint on the bass settings and presence in the mid frequencies. Though many at the time would have accused this sound of being too clean, the precision of the sound combined with the controlled analogic distortion have allowed the guitars to retain a crunchy yet decipherable sound. The double bass drums have an accentuated click that is completely unnecessary as the lower frequencies are still easily distinguishable from the bass guitars. Snares and toms sound awkward yet completely natural adding to the percussive power of the music. The bass has the required low end to add more power to the sound yet enough high end to be able to break away during strategic moments. The sound of this album has aged considerably and remains easily listenable without sounding plastic and giving Malevolent Creation the freedom to completely express themselves.

Suffocation Effigy of The Forgotten would alternate staccato played palm muted power chords and fluid tremolo picked riffs as chromatic ideas were permitted to expand in different kinds of directions before they were deconstructed during the breakdowns before being spring boarded into other ideas or different iterations of the same motif. On Retribution the syncopated Suffocation riff exists to counter the main melody and to signify the end of a phrase. This is achieved through large intervals rather than chromaticism. The large intervals stop melodies from developing in other directions and anchor them in a predetermined direction but provide a more powerful contrast between both section. An interesting detail that Malevolent Creation have completely managed to appropriate is that they can slightly modify their breakdowns to allow a transposition of the riff and thus a progression in the narrative as evidenced by the second half of the track “Eve of The Apocalypse”.  In these moments the bass shines, as it plays variations of the counter melody on top, doing an excellent job of increasing the tension and building the counter-melody toward places where the accumulated tension can be released.  At times these breakdowns lead into gratuitous speed metal riffs containing nothing more than rhythmic intensity and losing all gained momentum. Where Retribution’s breakdowns really shine is when they are given the time to be introduced properly and slowly morph before introducing a new melody and a new cycle of melody and counter melody.

The Ten Commandments was at times overtly a speed metal album and stayed trapped within the corresponding sub-genre tropes. Retribution condenses the speed metal to be used uniquely for rhythmic effect and at times to replace the breakdowns in connecting different melodies. This takes us to the main problem of speed metal in that it is music of various ideas caught between moments of static chugs. “Coronation of our Domain” demonstrates the problem very well as a breakdown leads straight into a one note heavily syncopated section as a melody clumsily sneaks out. Transferring directly into the melody would have given it the strength it needed to pierce through whereas here it has fight through the chugs before leading into another problem. The speed metal trope of creating a chorus based not on a melodic motif but rather a rhythmic one with the title repeated by the vocals. The issue is that this halts all progression within the song to accommodate for a catchy passage and in the realm of narrative music such as death metal that is not conceived for instant gratification this chips away at the credibility of a band.  The band conveys urban violence and the unexpected element of assault but due to the speed metal elements, the message is muddied and not communicated clearly and has stopped the band from ascending to the same heights as their peers.

An underrated quality of this album is in the ability at times to chain consecutive tremolo picked melodies by accentuating on consonant transition as to not seem jarring. The melodies propagate the violence of the lyrics with clarity and are sometimes comprised of very intriguing chord progressions such as some of the ambiguous ones that Obituary used on Cause of Death that oscillated between seamlessly chromatic progressions and the natural minor scale. Many diminished progressions come through and add intrigue and the general confusion related to assaults in cities. The melodies when partnered with the thrash metal riffs do tend to be shortened and feel more like ornaments to the rhythmic patterns than actual melodies.

Retribution is an album that has managed to overcome its many faults through sheer force of power and through the portrayal of a more modern form of spontaneous anger, and it strikes directly into the weaknesses of modern man and what makes him so pathetic. The present album still remains deeply enjoyable and very few records express blind rage as fluently as it does, even if it falls short of being a classic. Although Pantera and the like would take some of these ideas, they were completely incapable of communicating the same rage and authenticity. Malevolent Creation were lucid and stable long enough to record this pearl, but they lacked the vision and the will to separate their music from that of the past generation. In doing so, they have robbed themselves of a place in the Death Metal Pantheon.