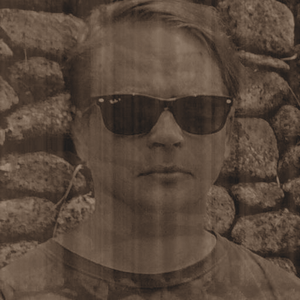 Clearly Laiho’s profeciency in structural arrangement shines over the course of this hour-long mix. Laiho, being responsible for the songwriting on all of Beherit‘s past albums, exhibits confidence and even some restrained gleefulness (evident in the skittery high-hat punctuations during the early quarter of the mix in particular) that was lacking in some of the recent Beherit work such as Engram. Some listeners could feel a troubling disenterest permeating the highly repetitious songs of Engram, which suggested that Laiho’s artistic inclination had developed more toward longer, ambient-style arrangements; a method that has been utilized successfully by the likes of Darkthrone and Summoning, but produced flat results in Beherit’s songs, possibly because their lengths and structure did not provide ample space for development. This newer method of composition allows space for the listener to sink into the steady cyclical pulse, and fully absorb the atmosphere of the movement before being exposed to another type of pulse which reveals itself to be the constant flowing mutation of chords and beats; at best, the listener is drawn into this evolution and, himself, becomes a component of the process.

This mix shows Laiho commanding a proficiency and ear for rhythm – most notably in the melding of drum/bass and trap drumming at half the pace – hinted at by earlier work such as Dead Inside; and briefly drawing a clear line towards the work of other auteurs such as Autechre. An unorthodox turn grants the piece a mild reprieve by collapsing into a soft piano sonata treated delicately with sampled pop-leaning female leads. This is one of a few such moments in which vocal samples provide a lattice to mundane life as if the goal were blur the division between meaning and experience. The dialectic between the mundane and the extraordinary runs the course of this work and is further emphasized in the contrasted underground and mainstream sensibilities.

The successful conversation between the two camps here manages to balance out the deficiencies inherent to either approach: the underground tends to be a compartmentalizing art which often fails to signify individual experiences while the mainstream elevates these without an ability to proffer a unifying narrative. Laiho seems to have unified disparate approaches in this genre which likely will not affect greater changes in taste but at the very least changes in consciousness for those exposed to his production here.