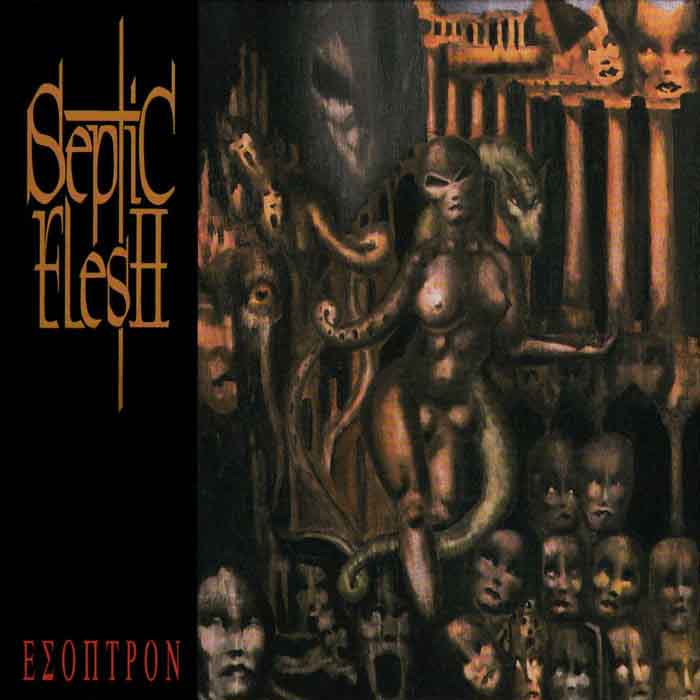 Esoptron‘s finds its inspiration in the empirical exploration of alternate realities through Western Left Hand Path traditions. When seen under the light of this fact, the name of the album acquires an intensified significance, unveiled esoterically through intuition yielded by the acquired knowledge of stories lying behind brief clues. Taking the first and last tracks as the beginning and ending points of a mystical journey, one understands the former as the process of initiation and the latter as the terrifying encounter with the dark deity.

“Again, the devil taketh him up into an exceeding high mountain, and sheweth him all the kingdoms of the world, and the glory of them; And saith unto him, All these things will I give thee, if thou wilt fall down and worship me.”
Matthew 4:8,9i

Demonic pathways are indicated through sonic sorcery and the listener is pushed inside just far enough so that reflected vistas upon a black, metallic mirror gives them a tenuous glimmer of wonder and horror under inseparable unity.

This is all done through a rather accessible style, which through admixture with more potent tributaries and the emphasis on ritualistic atmosphere within their main rock aesthetic accomplishes something that, although falling short of transcendental musical manifestation as a result of the natural limitations of simple rock music, opens a door, or at the least leaves a scratch mark on its frontispiece, so that the listener may later return and earn the key with which to attempt entry through his own means. This dancing to and fro, this incessant flirting with unacknowledged danger, is what Septic Flesh intend by luring you into a false sense of security; rocking your inebriated body and numb mind so that you willingly fall into Her arms, under the shadow of Her extended bat-wings. Once you have realized you have given in to her possessing dominance, it is far too late: drunk with ecstasy and an aching desire to have it all, an unquenchable thirst to know it all and reach the apex of that inverted pyramid rising along the vertical of an unknown dimension.

“Hence, they also transgressed with Nukva Lilit (Lilith) the sinner, and wished to draw the entire world toward sin, to fling it into the last stage of egoism, for they did not wish man to return, as it completely contradicts their root.”
Sepher ha-Zohari

The uneasy and ambiguous, in the direction of sensuality, is constantly present throughout the album and may be said to be the emotion that defines it in something akin to pleasurable guilt of the earthiest kind. These are the sort of lusts that the Moon wakes in Man, and that Woman through her naturally divine nature summons several days a month. Here are life and death brought together, here lie the great mysteries of life in their densest and most differentiated manifestation. Poetically, the action of bringing these opposites together alludes to that most meaningful of European mystic expressions, and could be found, if anywhere in the album, in the use of aesthetics both threateningly underground and soothingly mainstream, while upholding an artfully preserved voice that was perhaps unique to these musicians at this point in their careers.