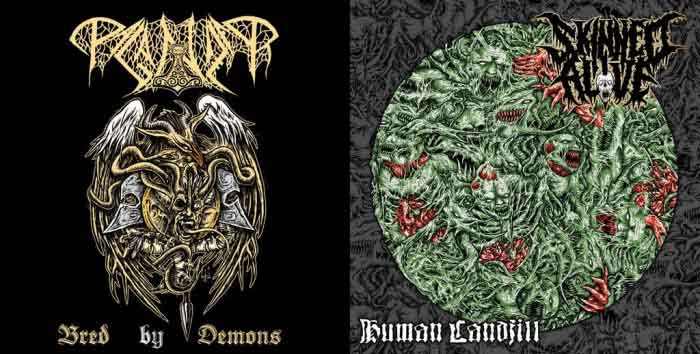 A small death metal label zoomed into focus this year when it signed a classic death metal act for a split album. That label, Brutal Art Records is run by a reclusive person who literally lives in a van down by the river, if you do not neglect to mention that the van is armored and its radar and cameras constantly scan the surrounding area. This person was kind enough to put down the H&K MP5 for a moment and answer a few questions about Brutal Art Records…

When did you start Brutal Art Records, and why did you decide to start a label? Had you previously run a distro?

I started this little underground label in the middle of 2013 because I’m a huge vinyl collector and I don’t like the stupid black releases. We all know them: you can buy the black edition of an release everytime everywhere. The industry destroys the dream of every collector, which is to have a limited record in different versions and there will be no repress. That’s why I started this label, only limited stuff and there will be no repress in future. Sold out is sold out ;)

You have released a number of underground death metal records. Why did you decide on this style? Do you think it has a large number of fans?

The reason is the same as in the first question: I’m a vinyl collector haha. Vinyl is more more old school so it fits perfectly with the first bands I released, Obscure Infinity – old school death metal from Germany and Humiliation – old school death from Malaysia. Both are great underground bands and it was a real great project for me.

Every label can release a CD version, it’s cheap and you can sell it to everybody, but only the old school music maniacs also have a vinyl record player.

With your most recent release, you have signed one of the most respected names in the underground for over twenty years: Fleshcrawl. Did you know the band? How did this release come about?

I know the music they did in the past and yes, I like them. It was not my idea to start this project; the founder was Ferli the Men behind Skinned Alive (also member of Demonbreed and Milking the Goatmachine). He is a real freak, a really crazy one, and he told me “let’s start a tape project because I want to release this old school shit.” I agreed and we started to search for a perfect split band. Ferli knows Sven, the front beast of Fleshcrawl, so he asked him and Sven agreed. The work with Fleshcrawl started. The band is really friendly and they’re no superstars. That’s why I love this shit.

There seem to be a lot of death metal releases these days, but almost none have made it to “classic” quality. Do we have too much death metal? Is there still life in the style?

The scene is alive, but there are a lot of stupid bands. We have some really great young bands for the job like Deserted Fear, Obscure Infinity, Demonbreed, Skinned Alive, and many more but also some real old tanks like Fleshcrawl, Postmortem from Berlin and much more.

What is the German death metal scene like? Are there many fans and bands? Do you think it is changing, or will it stay within the classic death metal styles?

There are a lot of both bands and fans. I think the scene splits into the old school and the more brutal one. A lot of bands play the typical old school style like Entombed, Grave or Obituary. The other ones play much faster or more like the doom style so the scene is bigger than in the past. A lot of sub styles were created. For me it’s very interesting.

How has Brutal Art Records grown over the past few years? Do you have a goal for where you want to be next? Will this become a full-time job for you and your staff?

The label was born in the underground and it will die in the underground! It will not be a huge label because it’s only for great underground bands not for the big ones. I don’t have a real goal; I only want to have fun with every band and every release. Thanks a lot for the bands I worked in the past like Humiliation (Malaysia), Paganizer (Sweden), Down Among the Dead Men (UK), Obscure Infinity (Germany), Graveyard after Graveyard (Sweden), Fleshcrawl (Germany), Miseo (Germany), Revel in Flesh (Germany), Skinned Alive (Germany), Mass Burial (Spain) and Savage Deity (Thailand).

Normally its work for a full time job but its only a hobby for me.

In your view, what are the classic bands and releases from German death metal? Are there any that people outside of Germany should know about, but do not?

That’s a bad question because there are too many great releases. Check the German bands like Fleshcrawl, Lay Down Rotten, Sarx, Revel in Flesh, Blood and so much more. I don’t like it to say this is good or this one not.

If people want to learn about you and your bands, where should they go? Are you soliciting demos from bands, and how do they contact you?

We publish as much as we can on Facebook. Every band can write us on Facebook (facebook.com/brutalartrecords) or by email (brutalartrecords@web.de). We are interested in good underground bands but we can’t release everything. Feel free to send us your sickest work.