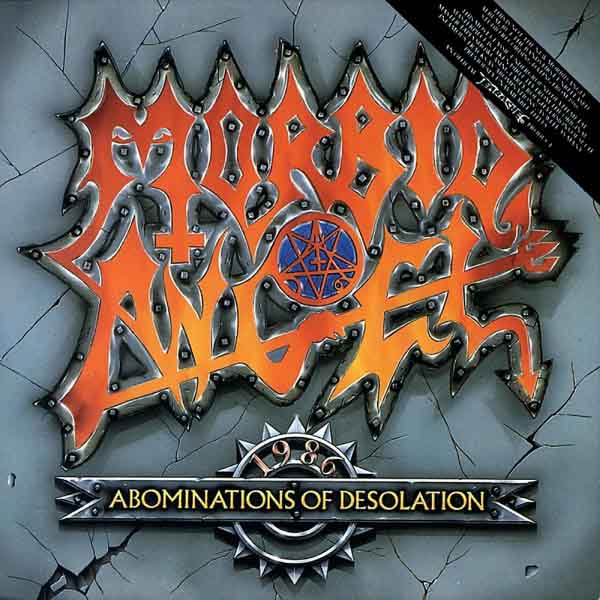 Abominations of Desolation (1986) appeared during the fertile years of death metal as the first full-length release from Morbid Angel but was relegated to demo status during the period when the band became more well known. All the songs except “Demon Seed” were re-recorded on later releases.

The true first Morbid Angel album reveals the genetic material that the band would then expand for the next three releases during what would be their musical prime. It shows the band at their peak from a compositional point of view owing in part to the combination of Azagthoth’s and Browning’s genuine belief in the Necronomicon and the focus on making their music the soundtrack to their beliefs.

The incredibly diverse riffcraft shows the band absorbing influences principally from Hellhamer, Angel Witch, Slayer and Mercyful Fate. Unlike their influences, the band plays fully developed death metal with long tremolo picked passages, single picked notes, fast alternate picked open strings playing against moving power chord progressions, even playing with other diatonic chords from time to time and combining the whole in a varied amount of ways depending on the needs of the songs. Notably absent is the influence of speed metal which would appear on the more streamlined Altars of Madness (1989). None of the bounce nor the rhythmic interplay of their contemporaries is in evidence here; the band does not accentuate the offbeats nor do they use the choppy syncopation of their more well-known peers.

From the heavy metal that was so influential to this record Morbid Angel brought the device of guitar solos, not as an ornament or an embellishment, but as a central piece within the composition that works closely with the rhythm guitars playing underneath. Here is a band with a limited number of technical tools derived from previous bands but combined in a large variety of ways that sets the standard for all of death metal and allows the band to create much more powerful melodies that can be interconnected in maze like arrangements.

Contrary to popular belief Morbid Angel never attempted to create atonal music as they obviously do enjoy smashing one note or power chord and then making the whole sequence invert the relationship formerly established. However, on a much subtler note Trey Azagthoth does have the ability to play with tonality in the most twisted of ways. Take for example “Chapel of Ghouls” and how the low chugging has a particular power to it and never sounds like the chugging between riffs from any speed metal derived band. That is because the chugging note is not the actual root note of the song but what is referred to as the subtonic. This is the last note in the natural minor scale and demonstrates a lack of desire to lead into the root note of the scale. Rather than a rhythmic embellishment, we are treated to an integral note in the many motifs of “Chapel of Ghouls” and how the band managed to truly convey power and occultist ideology through simple yet effective musical choices.

Chromaticism at this point in time had already been a widespread technique but Morbid Angel decided to apply their own twist on it. Rather than create fully chromatic passages the songs are derived from the minor scale and its variations but with added streams of three or four chromatic bursts. This really did obscure the tonality of certain passages, and gave birth to the myth that Morbid Angel played atonal music to make the band seem much more intellectual where in reality the young band did even better than that: they adapted tonality for their own style and to this day very few bands have been able to emulate these techniques efficiently.

The arrangements here push the riff as being above all else. Multiple melodies form these songs that flow in such a fluid manner that this would inspire the Norwegian scene in their compositional choices. The melodies vary in tempo and in note selection yet the transitions never sound forced as the band will lengthen the note duration when speeding up and shorten the note duration when slowing down. This allows for these motifs to mutate without being held back by rhythm. The influence of Mozart is subtle but is ever present in the way the band designs the arrangement of each song. At first each song has a primary melody that either begins the composition or is introduced by a motif of minor importance. A development then occurs either through a new riff that either takes the previous motif and transforms it or through an entirely new riff accompanied with a tempo change to push the tension even further along. Eventually the music arrives at an apex where all the tension is released before it concludes on the main motif that has now become a revelation.

Let us look at “Angel of Disease,” which has a simple heavy metal motif in D# minor without any chromatic notes. It is then warped to a slower riff that is barely in D# minor but has been deformed entirely by surrounding chromatic notes and this continues the momentum of the main motif as the cycle repeats one more time before branching out into a palm muted stream of single notes working in opposition with the secondary motif leading us to the grand climax of the song. The solos Azagthoth performs obey the underlying riffs and, through a combination of insane melodies that are at times atonal whole tone jumps or some very unique arpeggios like the diminished seventh which is an endless stream of minor thirds, create some very unique sounds. The solos through their madness show a strong logic where they reinforce the arrangements either by providing the climax or by creating even more tension upon the chromatic segments.

Abominations of Desolation takes the underground metal that evolving at the same time and use it to make the first truly mature death metal record. Surprisingly the heavy metal of the past is still very present in this band though it remains a device for the creation of the more consonant motifs, yet one can only wonder what the avenue explored by the only song to not appear on future records “Demon Seed.” The extravagant heavy metal didn’t seem to be in accordance with the band’s future works but what we have here is a Judas Priest style composition that plays with its dual identity, and it would take a few years before the European bands would develop this style further.

Where the influence of future country singer David Vincent would push Morbid Angel to explore grindcore and speed metal whilst taking influence from this album, Mike Browning was able to channel the band toward creating a powerful piece of art that is still to this day not fully understood and that neither musician has been able to recreate. There are far too many elements in this album to effectively analyze in such small an article as this is, but it reveals the power held by the common beliefs of two above average individuals, as well as reveals the magic that happened in that incredibly short period time only to disappear back to the depths of hell. 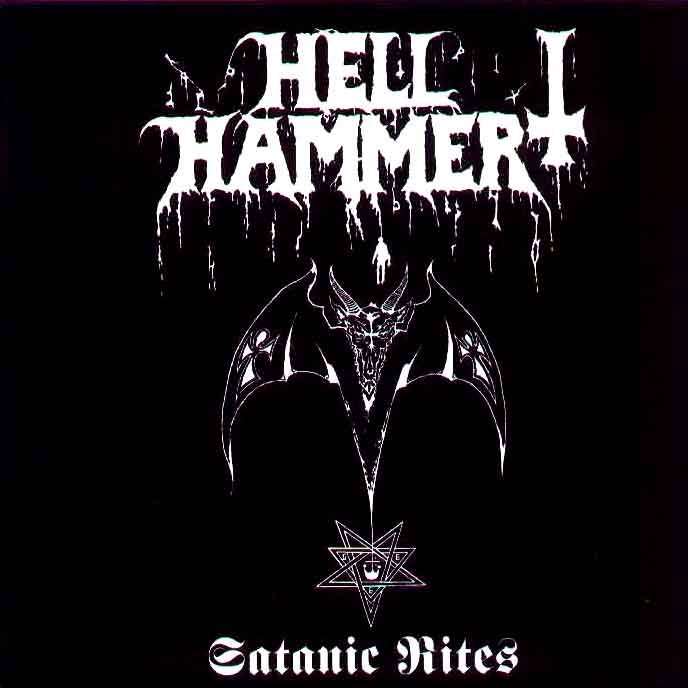 Musical innovation does not spawn independently. Most of the progressions in underground metal have taken stylistic influence from more accessible genres and within those aural parameters created a new foundational narrative to divorce the context from the aesthetics it had previously used as a guideline. This approach allows for a less jarring immersion into a musical journey while at the same time utilizing tropes of superficial familiarity to manipulate the audience into being subjugated to an indirect path towards the artistic catharsis of unique expression that is the spiritual negative of the aesthetics used. On Satanic Rites, we can observe how Hellhammer has utilized the foundation of punk rock to shape their sound while introducing a unique tonality and dynamic scope to flesh out the beginnings of a new musical genre.
END_OF_DOCUMENT_TOKEN_TO_BE_REPLACED 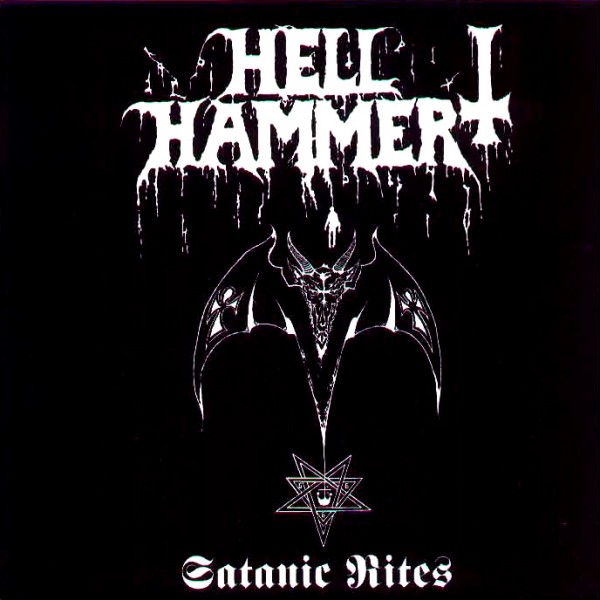 Satanic Rites is one of the early influences that would take the heavy metal and hardcore punk of the past and transform it into Extreme metal through some groundbreaking compositional tools that were unheard of at the time. On first listens, the music can be confused for many other bands due to the impact this record had in its time, and rightfully so as it serves as an excellent introduction to what metal would have perfected on a much larger scale a decade later.
END_OF_DOCUMENT_TOKEN_TO_BE_REPLACED