I’ve never heard this band, and this post is about critics, not the band:

ABHOR’s masterful (and MORIBUND debut) “Ab Luna Lucenti, Ab Noctua Protecti” is released! and lately, it’s been slaying the critics worldwide, as these snippets are testament to:

•“Abhor seem to want to transcend, and judging by the quality of the songwriting, musicianship, and esoteric hymns found here, they have succeeded” – Zero Tolerance [5/6 rating]

•“Packs in enough weird character to make this well worth the time of occult metal voyagers” – MetalReviews.com [8/10 rating]

•“A pretty successful effort, and an enjoyable and accessible listen” – Eternal-Terror.com [4/6 rating]

•“An epic release and could end up making my top ten list at the end of the year” – Wickedchannel.com

Yes, they rave about everything.

And yet… and yet there’s a lack of real substance.

What can we learn about The Critics? 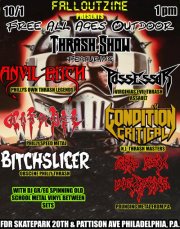 DJ GR/EG – Host of Philly’s Metal Mondays & Hessian Aggression, who will be spinning nothing but the finest old school metal on vinyl between bands. 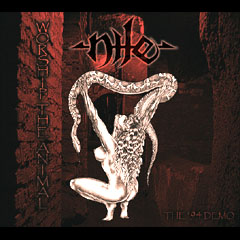 In 1994, Nile recorded a demo, Worship the Animal. This is from their early years when they still wrote death metal riffs, before the indie/rock/prog influence took hold. It will be released on October 11 on Goomba Music. 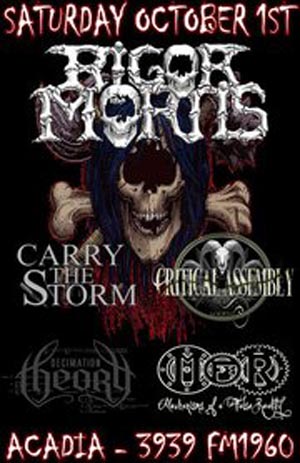 Rigor Mortis and four modern metal bands are going to tear up the outskirts of Houston, Texas on Saturday October 1 from 8 – 11 pm.

You all know Rigor Mortis as innovators in the realm of non-effete melodic metal, intricate song structures, daring instrumentals and a bizarre and disturbing sense of humor. Now you have a chance to see the original line-up live, after a short drive (by H-town standards) and some metalcore.

…from the dude from Allegeaon, whatever that is:

The Dallas Observer has set up a democratic poll to very democratically elect a local band as “Best Metal Act” of the year.

Naturally, every band and their dog’s dogs are gaming this system, in tribute to the true nature of democracy (buying votes with lies).

That means that in order to compete, all contestants need to rig the vote… see where this is going?

Warbeast is the latest band of Rigor Mortis vocalist Bruce Corbitt, who is also interviewed on our site.

He could use your votes.

He appears to be trying to reform melodic black metal, death/black and the hopes/aspirations of the older work. Dissection, Dawn and Eucharist fans take note.