New Imprecation tracks will be unleashed next week, the release should be ready by the end of March. The songs to come are entitled “Hosanna Ex Inferis” and “Angel of Salvation’s Doom”. – David Herrera

19.02.2012
After a longer winter-sleep summoning is back again and ow works constantly for a new release. We promise that in the near future we will regularly update the homepage again, so it will we worth the costs to check the page in regular intervals.

The present situation of Summoning:

In the past years we have worked on new material just very rarely because of different reasons (partly personal, partly being not motivated enough) but since the last months ,we intensified the work for new material and realised, that the old spirit is back again and we are very motivated for a cool new release and we are very committed in every terms of composing.

Meanwhile there are two songs which are fix starters for the album. 4 or 5 songs are in a more advance state and we composed riffs for at least 10 or 15 songs in a very early state. Btw. we still have one finished song from the last oath bound session which also will be in one or another way. so probably this time we are in the luck situation that we have more songs left, so maybe there will be some special limited fan releases beside the normal release, but this is of course just a wish right now.

We hope that until the end of this year most of the material for the new album can be finished. In the moment we have no concrete conception about the lyrical concept. All we can say right now is, that Summoning is still alive and middle earth will awake again. – SUMMONING official web presence

It does not sound like it will be soon, but so long as quality is high, it will be massively anticipated. 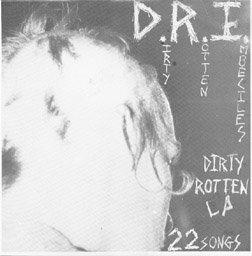 Mix together the early CIRCLE JERKS, early BLACK FLAG, MDC, MINOR THREAT, SSD, TERVEET K�DET, and GANG GREEN, and you have something approximating these DIRTY ROTTEN IMBECILES (so-called by their parents). What can I say–this is manic, intense, tight thrash with great lyrics, and I can’t wait till these Houston boys unleash themselves upon the rest of us deprived people. 22 songs.
-Tim Yohannan (from Maximum Rocknroll #5, March/April 1983)

This oddity features an all new 39 minute mini-album plus the “The Grand Masters Session” Box Set on CD for the very first time. Nearly 80 minutes of true blasphemy & perversion.

PART #1 features 5 new songs plus 2 old classics written and recorded by Ledney with a session member. The performance on this work is much like their primitive NECROVORE-ous atrocities committed in the early ’90s and allows for safe assumption of what could have been heard on their long-lost album, “The Raping of the Virgin Mary.”

Meanwhile, PART #2 features the same titles but written and recorded by Gelso alongside the same drums & vocals performed on part #1. The execution of this session continues in the more musical direction showcased on their first 2 albums and incorporates soundscapes sonically compiled by the late Aragon Amori. The end result is nothing short of devastating, and the vast contrast between these two sessions takes on the form of an album in itself that is sure to appeal to both old & new devotees of the black cult.

Finally, “The Grand Masters Session” previously available as a vinyl-only 8″ Box Set, is a raging 2008 “live in the studio” recording showcasing many of the classics, a few newer hits and an exclusive medley (a conglomerate of 5 songs).

Yes, the mighty french legend SUPURATION (aka SUP) are back from the crematory in form of a retrospective collection CD which includes all the earliest and most brutal stuff of the band from ’89 /’90 when they were in their most Death Metal shape right before they started to experiment with clean vocals and more varied sounds.

“Back from the Crematory” is the generic title of this cult release which is planned for an imminent release on September 16th. The CD includes the awesome band’s debut self-financed mini CD “Sultry Obsession” (’90), their only demo “Official Rehearsal” (’90) as well as the impossible-to-find demo of the band’s very 1st studio recording “Haunted” under their previous monicker ETSICROXE as well as a 9-song live show, both from ’89.

This masterpiece comes with remastered sound and packed in a total old-fashioned layout in contrat to their latter weird & sophisticated designs. Includes killer 12-pages booklet featuring an exclusive retro-interview, liner notes, cover and tons of old photos & flyers. This definitely a must-have release not only for every SUPURATION fan, but for every lover of the good old Death Metal from late 80’s and early 90’s!!

New Lord Wind: not metal per se, but metal in spirit, and it will be hard to beat this impressive CD that I’m already calling as “album of the year.”