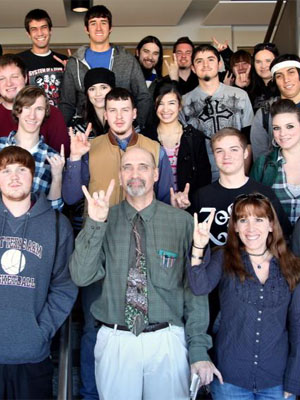 Yesterday we reported on how a Texas professor has been using heavy metal to teach literature. Today we are fortunate to have an interview with Professor Martin Jacobsen, who teaches “Introduction to Literature: Heavy Metal as a Literary Genre” at West Texas A&M University.

Professor Jacobsen uses heavy metal music to introduce students to literature in a class that he says is “50/50” lecture and listening to music. Among other topics, he tackles the history of metal, the reason the first songs on metal albums are important, the artistic superiority of …And Justice for All among Metallica albums, and the progression of first generation black metal.

Apparently this class arose from a sentence diagramming exercise in another class. How did you realize that this could be a class of its own?

The students realized it. I just mentioned it would be cool to have a class on heavy metal, and the response was crazy. Word spread and people started asking me about it. The boss was in favor of it, and we had already been offering some classes off the beaten path. So, I proposed it.

Approximately how many of your students do you think are heavy metal fans?

That’s a hard question. It’s fair to say most of my students aren’t. I teach a lot of elementary education majors, and most of them are not metal fans. But the English majors are. And among them, it seems to cut across genders and ages and other factors. You’re probably right that Romantic literature and metal have much in common, and the questioning mindset of a humanities major surely brings them in line with heavy metal.

“Introduction to Literature: Heavy Metal as a Literary Genre” teaches English using metal from over its forty-year history. What generations of metal do you consider, and can you give us some examples of each?

It’s pretty even across decade: 1970-Classic Metal; 1980-NWOBHM; 1990-Mainstream Metal; Nu Metal-2000. These are centers rather than inceptions, and I mean to suggest that this is when they reach a type of critical mass (i.e. albums Paranoid, British Steel, Metallica, etc). The early 1980s are when all the genres became established really — especially black, death, and thrash metal. All of them persist into the present. Prog metal is surely an outgrowth of RUSH, but there seems to be a lot more of it since the 1990s.

Do you think heavy metal artists are actually reading and influenced by literature?

Yes, some of them are. Or the news. Or some other source of ideas. Geezer Butler and Ronnie James Dio have talked openly about their reading. Clearly Steve Harris and Bruce Dickinson are very familiar with literature. Rush and Dream Theater in prog metal use literary themes and models (like Ayn Rand’s ideas in 2112 or the Hamlet motif in DT’s “Pull Me Under” or the Metropolis suite). Movies play a huge role too, and metal artists seem to see books and movies rather equally. Iron Maiden seems especially prone to use imagery from movies, though literature and history are also clearly sources for them.

Of all the literary movements throughout history, which one do you think is the closest in form and content to heavy metal? Is heavy metal an artistic “movement”?

That’s a very interesting question. I think it follows them in some ways. Much of it is similar in nature to Romanticism. Surely Death metal and Black Metal have postmodern elements. It is a movement, I think, and what’s interesting to me is how it has so many sub-genres within it. We can really analyze metal as a literature of it’s own making. While it’s interesting that metal artists use so much from literature, it’s even more interesting that they have enough depth and innovation to create an independent ethos.

Do the literary qualities of metal change between generations of metal, for example between NWOBHM and black metal?

That’s a good question. Some of the newer stuff seeks to be shocking for the sake of being shocking. That ruins it a little bit, I think. But even at that, one of the things metal does is put every question on the table. That’s what art does. It’s like cubism in painting or baroque in classical music. Take the norm and skew it and then re-present it to the world so they can think about it. I think new groups can ask the questions more explicitly, but I’m not sure the questions have changed. Death, pair, fear, war, pessimism, metal stability–all of these recur again and again. And they are questions that need asking. If heavy metal serves the world, it does so by interrogating notions every other approach seems afraid to interrogate. There are a lot of scary ideas in this world. And some people think that metal is one of them, I suppose. But any real metal fan will know that the real point is to talk about these things openly. Maybe that’s why we’re so loud. We talk about things no one else dares to engage. We have to speak up to be heard.

How have the students responded so far? Do you see more engagement with this as the subject matter, versus literature at large?

Way more. But, many of the students are in the class precisely because they are metalheads. Other literature classes at this level are seen as ‘have to’ humanities classes. I usually teach classical literature when I teach these classes. I get pretty good responses in those classes, but nothing like this. The students called the secretary the other day because we had a blizzard here and they wanted to make sure class was meeting. They didn’t want to miss it. Usually, a blizzard is a day off for most students, especially for a core class. This class draws people who want to be there. It’s not a fair comparison in many ways.

Thank you, Professor Jacobsen and students for taking the time to answer our questions and send over classroom materials. We hope this class becomes a regular at your college — and others!