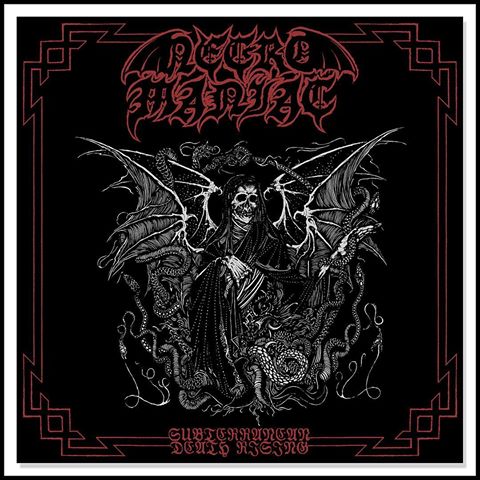 “Subterranean Death Rising” is composed within the Proto-Extreme metal style in terms of aesthetics and note selection but has extended fully into the Death metal riff labyrinth reminiscent of early Morbid Angel. The initial motif firmly establishes itself before slightly modulating in the most natural of ways and changing its resolution before fading away and introducing another similar motif that then introduces a tremolo melody that then attaches itself to the initial motif to form the principle motif of this composition. The band then progress from that tremolo melody unto other avenues riding the momentum as far as possible before deconstructing the motif to its simplest essence before rebuilding all the momentum from the breakdown that takes the previous motifs and melodies and regurgitates them into a moodier passage full of tension before unleashing it all in a long pseudo-chorus that serves as a the climax and ultimate conclusion to a brilliant song

“Sealed For Eternity” develops even further into the notion of the extended pseudo-chorus while retaining the techniques and composition choices from the previous track. Though this time there is a much stronger emphasis on expressing the chord progression as clearly as possible through the Swedish style of long power chord sequences with syncopation at strategic moments to emphasize the central notes. The melody is in the harmonic minor scale and contains only one off-key note that occurs just before each individual mini-resolution. The potency of this segment derives from how the band decides to eschew the long uneasy resolutions that seems to have defined Necromaniac at this early point in their career. This composition succeeds in creating interest beyond the obvious points of interest as once again they excel in the breakdown as one melody then bursts into a two voice part section with each guitar band playing a voice before reuniting at the tremendous hook. The only weakness that this composition presents is the lack of exploration that some of these motifs merit as the composition urgently seeks to conclude without taking the time to construct what could have easily been a long epic in the Bathory style.

There is no denying that Necromaniac have created the best record of 2018 up till now through their ability to effortlessly take from such a large diversity of Underground metal and condense it into their own sound and style. Though nothing is new here, Necromaniac have found their own voice in a dead genre swamped with immitators and clowns. Their compositions, playing ability and production style are fully evolved for a band with such little material that the first full length should definitely be a truly worthy record but that would be aiming too low for Necromaniac. With an eye turned slightly towards the grandiose and the majestic, Necromaniac should be able to release a modern classic on the same heights as Sammath and Ectovoid.