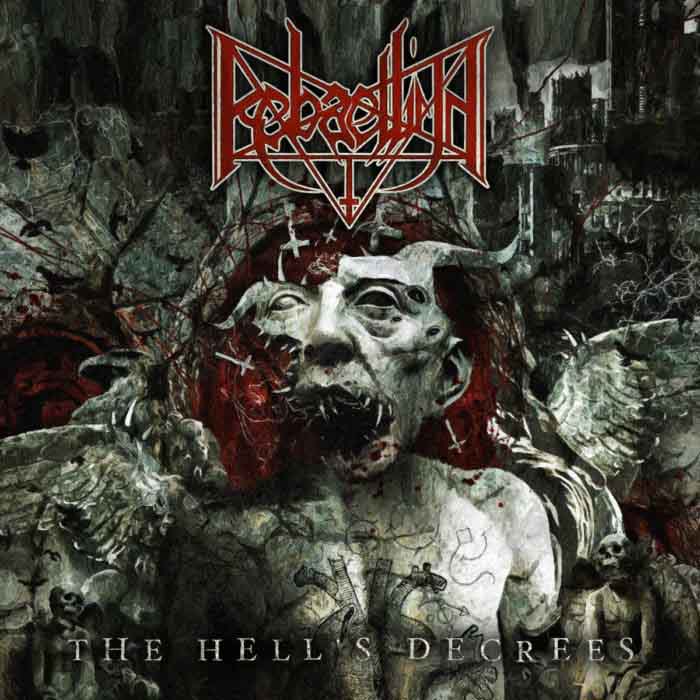 The drum performance here stands out immediately, being absolutely maniacal. Incessant battering at an unholy tempo reduces the rhythm section to a grating blur, which sounds inhumanly clinical, bordering on anxiety-inducing. In a rock music format, this sort of sterility, mostly devoid of human idiosyncrasies, would be boring or annoying, but the mechanical approach reveals the foundation of Rebaelliun’s philosophy; sinister efficiency, with ruthless inconsideration for the listener’s preference.

If the Morse-code-like drum patterns provide a molecular basis for the rest of the music, the guitars are the proteins that fold and link together to emerge as functional organs that rapidly evolve into specialized prey-killing appendages. Claws, proboscis, compound eyes, carapace; these much more organic features are described by the melodies, which move unhindered between top-speed chromatic fusillades and ringing funereal passages. There are no gracious melodies; all evoke a sense of intense hostility, like a wounded predator cycling through fits of rage, bouts of carnage, then a brief moment to observe and revel in the resulting bloodbath before exploding into violence again.

Finally, the highest process of this murderous machine is represented by the vocals, which are thankfully not too guttural or digitally distorted and strike a measured balance between vitriol and clarity. This is the thought process of the demonic beast whose lower-level body functions and features are described by the drums and guitars, respectively. From the first song, the vocalist makes their mission evident:

Oppressing the oppressor, my unholy will is free
The wild is calling to start the savagery
Denial of rules, denial of order
Reject submission, nihilist for eternity

Rarely does a band take such a sincerely convincing approach to describing and magnifying total and uncompromising evil in both music and lyrics. The relentless, baleful tone is uncompromised by any kind of musical break that would relieve the pressure on the listener for even a moment. This may actually be a weakness of The Hell’s Decrees, as many metal fans are accustomed to being bludgeoned in good sport but are also prepared to have some breathing room offered by a band. However this experience is not claustrophobic as there is plenty of variance in the song dynamics to keep the album from getting boring, but only the strong will survive this one, and even then they may not enjoy it.