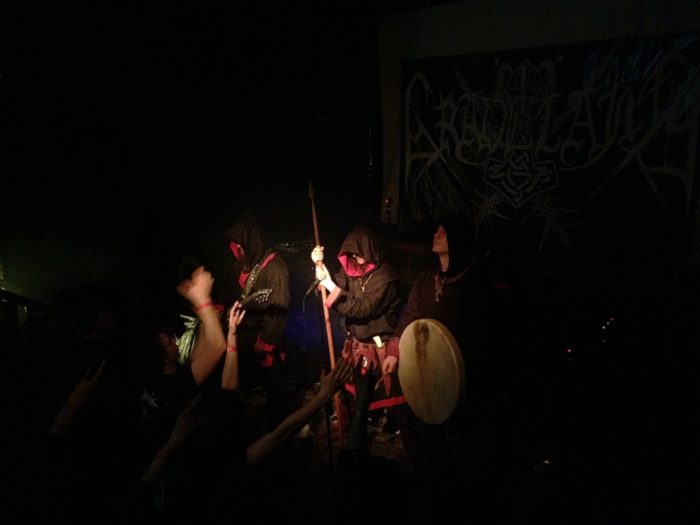 Recent Graveland shares general traits with modern black metal and compositions are slightly rearranged to be less jagged and abrupt than past efforts. It has remained relevant by synthesizing black metal with folk music and classical-derived film soundtracks, creating a forum for the dreamlike intensity of black metal alongside greater complexity in instrumentation and melody.

Live, the challenge is to replicate this new experience without losing the raw intensity of the earlier material. While 1050 Years of Pagan Cult is as unnecessary as Burzum – From the Depths of Darkness and most others from recent fad of rerecording, it serves quite well to represent how Graveland sounds on stage. The choices of modern bands regarding their sound and spiritual condition of metal are not merely coincidence.

In an effort to streamline the music, Rob Darken’s trademark keyboard lines are absent sometimes where they were repeated consistently on the original recordings. It is especially noticeable given that over the years keyboards arose to be Darken’s main voice, and at this moment his art could be effectively comprised entirely of them with guitars and bass providing a backing role. Fortunately, in songs where keyboards serve not so much as much a layer of atmosphere but a crucial element of structure, samples are provided.

That certain types of black metal aren’t proper for live setting represents a certain evolutionary specialization away from the type of music that “just anyone” can create and attend. This realization contributed to the quality of art of Burzum, Darkthrone and Summoning in the second half of the original period of black metal. Apparently, Darken is still aware of this. It seems that bearing in mind all of the important limitations, including the fact that his band is relatively inexperienced as a live act, he chose to give people the opportunity to partake in some more tangible way in idea that is Graveland and listen to solid, albeit more manageable material. That was probably the most sensible option. But one does not attend Graveland’s concert to listen to regular metal.

As a result, despite great atmosphere, proper performance and the fact that Darken is an unexpectedly good frontman, it is hard to get rid of the impression, that the setlist based mainly on basic, raw black metal is somewhat unsatisfying. After all it doesn’t reflect band’s most important inventions and contributions. It is Graveland’s less rigid music that actually has potential to invoke the pagan mysterium and that perhaps should be band’s most ambitious aim here. While some of the solutions taken by Graveland may be temporary and given enough time will develop into something truly sublime, as for now, due to various limitations and compromises they are less able to pull that off.

What also must be taken into account as a negative factor here, is that the music may be performed in less than adequate environment. It seems that such possibility will only increase in the near future, especially if left unchecked. The reality is, that after a few shows in Europe, Darken, undeniably Poland’s most important metal artist, whose music is appreciated by metalheads around the globe, even in his own country, in his home town was forced to play a truly underground stunt. And even then, the location of the gig1 had to be held in secret till the last minute for it to be possible at all.

[1]   The one I’m referring to (29.04.2016) was actually the second Graveland concert in Poland. The first (22.04.2016) was held in a club located in historic and symbolic place – Gdańsk Shipyard. Despite attempts, Leftist activists and NGOs did not manage to get it cancelled and that one proceeded without further hindrances. When it came to the second one, in Wrocław, Leftist journalists intervened by exerting pressure on owners of the club. Ultimately, they resigned from hosting the show and the only other place which band managed to find was technically less appropriate, to say the least.