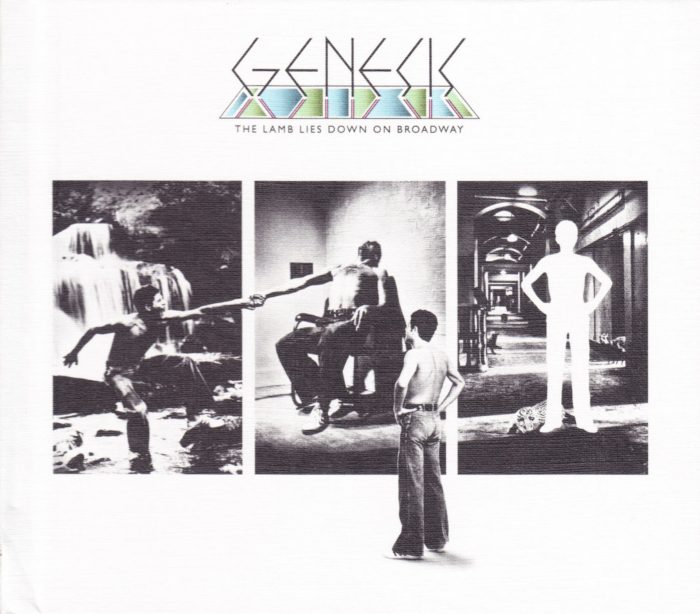 Article by David Rosales and Johan P. This article is the second in our 1970s Progressive Rock for Hessians series initiated by Johan.

Released in 1974 and signaling the departure of Peter Gabriel from Genesis, The Lamb Lies Down on Broadway brings the classic era of the band and the genre to an end. It does so rather inconspicuously with a profound accomplishment that is not easy to summarize in such few words. The album materializes the several tacit goals of progressive rock: the incorporation of classical music methodologies into the making of pop rock music, stylistic expansion within coherent boundaries, to the neo-romantic mystical allusions boiling up from vague lyrics into aural explosions in sound.

Musically, it makes use of straightforward pop rock expression expanded with a nod to classical-era structures, while ambients range from avant-garde noise to ambient instrumentals. We may even see the precursor to the post-rock aesthetic but Genesis takes the music somewhere rather than moronically dancing around in the same place. The use of themes throughout songs and the album itself is prominent; it holds the album together and is a direct consequence of that proper classical influence. The lyrical theme of the album is based on Judaic mysticism, with references to the Kabbalah in song titles, concepts, and even the number of total tracks of the release.

The influence of Genesis as per their style at their pinnacle in The Lamb Lies Down on Broadway virtually defines a whole generation of the pseudo-prog we see today in the likes of charlatans to which Steven Wilson belongs, or supreme posers Dream Theater and their numerous unoriginal underlings. Opeth cannot be counted among the superficial fools living off the greatness of Genesis as they are a more eclectic collection of disparaged sources poorly sewn together and because the very little prog rock influence they displayed comes from Gentle Giant. With all certainty, almost any decent-sounding, so-called progressive outfit today that leans towards a pop rock sound with unconventional sound structures is probably directly or indirectly defined by (not merely “influenced” by) classic Genesis.

Particularly outstanding is the elite drumming that underscores the thematic progressions of the rest of the music. At each point it answers to needs in the music, while not shying away from dramatic or even amusing additions to the mix. Jazz percusion technique here is used with taste, forwarding the music, rather than becoming an instrument for divergence into hedonist egotism. Despite this, in The Lamb Lies Down on Broadway, none of the elements actually jumps out at the listener: the technical merits are so perfectly fused with the living flow of the music they may be overlooked. In this we may find great contrasts with Yes, whose brilliance was always a close-neighbor to instrumentalist prowess, threatening to and eventually taking over precedence of deeper motivations that move true art (as we see in Relayer).

To finish our brief discussion on this definitive album for progressive rock, we would be remiss in failing to attend to the reasons it achieves such excellence. Considering Nietzschean Apollonian versus Dionysian interplay, a reasonable speculation might start by pointing out that the most superficial and recognizable sounds in this album are distinctively ground in their seventies era. Even the use of avant-gardisms remains within the framework of the experimentation of its time and exemplifies what Pink Floyd were never able to properly approximate. The Lamb Lies Down on Broadway does not reject its contemporary influences, but through them accepts the band’s chronological appearance in history and maximizes their channeling of ulterior and less ephemeral reasons.