Every seven years, Dead Horse returns with a new website and some kind of record deal.

The rest TBA, I suppose.

You could be dicking around with:

Or, this track from Sorcier des Glaces’ re-envisioning of their aetheric black metal opus, “Snowland.”

Some new reading for y’all:

These made it to Examiner to keep that source alive; despite having terrible software, distant editors and mostly celebrity content, Examiner is a great place to promote metal and make it into mainstream news.

We live in a world that preaches dumbing down: be equal, be safe and mediocre, pander to others by making everything very, very simple and similar to the other stuff they like.

If you can imagine a long line of sheep, chasing each other through the night, and as the night goes on and starlight flickers across them, you see in their faces the features of wolves…

But one thing that cracks me up: the notion of quality.

Most people, dumbed down by this society and perhaps by their genetic code, can understand quality of tangible substance. For example, a jazzy beat. Good guitar tone. High speed chaotic songs. Really sick vocals.

They can even identify that it’s harder to play than average, or that it has “different parts,” like a melodic slow part and then an acoustic part, then some high-speed guitar, etc.

What they can’t do is string any of this together.

To them, a band like Necrophagist that plays fast riffs in a random order, and whose songs literally signify nothing, is just as good as a band like Camel who carefully string together melodies to tell a tale — and make sure it’s a tale that draws us in, has emotional and intellectual substance, as well as a good rippin’ gut-hitting theme, like the battle for independence or to find a holy grail of some sort or another.

These people literally cannot tell the difference between random riffs bands (Cradle of Filth, Cannibal Corpse) and well-architected, sensible patterns that tell a story (Massacra, Atheist, Incantation). To them it’s all the same, because the parts are the same.

It’s as if I build two structures out of plywood:

These people will walk up to them and say something like, “Well, that first one’s bigger, but they’re both made out of plywood. Over here, I’ve got a house I made from sugarcubes. That’s totally unique, dude!”

When we talk about modernity as a time of shallow thinkers… 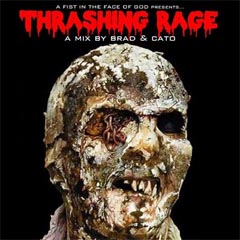 The lads over at A FIST IN THE ASS OF GOD have put together a compilation of undernoticed speed metal bands from the 1980s and 1990s. If you love this stuff, it’s quite good; if you don’t, it’s some of the more interesting edges of the genre so you can finally get “For Whom the Bell Tolls” out of your head.

Radikult, v., to engage in any grossly directionless, phenomenally incompetent and cosmically purposeless activity. For example: “We got there late, and at that point the only people there were fat neckbeards Radikulting on Segways, so we left.” If you needed confirmation the proles are running the show:

Like a stunning, stylized nightmare, Mike Hill’s first ground-rattling growl on Path of Totality is “CHAOS REIGNS.” It’s enough to conjure that memorable scene from Lars Von Trier’s controversial film, Antichrist, in which a self-disemboweling fox cryptically and prophetically utters these two words to Willem Defoe’s character. If anything, it sets the tone for a dark, fully absorbing listen on Tombs’ second album.

With Path of Totality, out June 7, the Brooklyn metal trio takes its disparate influences and distills an expansive palette using thick, controlled brushstrokes. The industrial sledgehammer of Godflesh meets the blast-beated darkness of early Darkthrone in “To Cross the Land,” while “Vermillion” intones a sinister psychedelic swirl over an impressive rhythm section preparing for war. The atmospheric Goth-rock of The Cure presides over “Passageways” and “Black Heaven,” as the dead-eyed stare of Swans — the members of Tombs are admittedly huge fans — lurks in unlit corridors. But while the band’s wide-ranging music libraries are on display, Path of Totality functions as something new, mostly because its extremity is tempered by a dynamic push and pull, accentuated by the spacious production of John Congleton, whose diverse clientele includes Explosions in the Sky, Baroness, Modest Mouse and St. Vincent. – National People’s Radio

Wow, look it has lots of different stuff in it. Translation: no direction.

Looks like a big-name indie producer made it. Translation: “post-metal” means indie with slow drums and distortion.

It’s on NPR. Translation: it’s OK by government and industry, thus as far from underground as you can get, no matter how underground it pretends to be.

From the Morbid Angel myspace:

TERRORIZER is back with a new album and the line-up consists of Pete on drums, Anthony Rezhawk, David Vincent on Bass and Katina Culture on guitar. The new album is in its final stage of production and will be out early 2012.

No word on whether they’ll do a 28 second cover of “Radikult.”