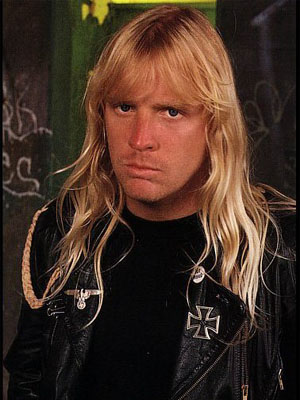 And so, after a long time of thinking he was immortal, we have to say goodbye to Jeff Hanneman and hope that all the doubters are wrong and there’s some metal Valhalla where he’s drinking Heineken and exploring all those solos that he did not have the energy on earth to discover.

In the traditions from which I come, the way we handle death — which we handle badly, if at all — is to describe the meaning of the life. This enables us to get away from the person, who is either nothingness or eternity per the rules of logic, and instead look at what they fought for.

In other words, what drove them to engage with life and reach out every day, which are things most people don’t do. Most of us just “attend” to things, like jobs and families, and hope for the best. The giants among us are driven onward by some belief in something larger than themselves or than the social group at large. They are animated by ideas.

For Jeff Hanneman, the idea was both musical and a vision of what that music should represent. He peered into the dystopia of modern times with one eye in the anarchistic zone of the punks, and the other in the swords ‘n’ sorcery vision of a metalhead. When he put the two together, he came up with something that makes Blade Runner and Neuromancer seem gentle.

Having seen this, he came back.

“I have seen the darkened depths of Hell,” the chorus begins. For Hanneman, his sin was too much sight. He saw the failings of his present time, like a punk; he saw how this fit into the broader concept of history, like a metalhead. Putting the two together, he saw darkness on the horizon encroaching and assimilating all it touched.

To fight back, he created music for people such as himself, youth adrift among the ruins of a dying empire. He created music that made people not only want to accept the darkness, but to get in there and fight. Not fight back necessarily, but fight to survive. He helped us peel away social pretense and reveal our inner animals which have no pretense about predation and self-defense, unlike civilized people. Hanneman prepared us for the time after society, politeness and rule of law fail.

This was, in addition to the shredding tunes, his gift to the world: a vision of ourselves continuing when all that we previously relied on has ended. Like all visionaries, he was before his time, and like many, did not live to see his vision realized. However, for millions of us, he gave us hope.

It is also worth noting that Slayer renovated heavy metal in such a way to set its highest standard. In any age, Reign in Blood, South of Heaven and Hell Awaits will be a high point for a genre. They fought back against the tendency of metal to become more like the rock ‘n’ roll on the radio, and to lose its unique and entirely different soul. Hanneman and his team pushed forward the frontier for metal, and pushed back the assimilation by rock music.

In the wake of Hanneman’s death, we are without a king, so to speak. The elder statesman role passes to a new generation, and they must find in their souls the bravery and fury to create much as Jeff Hanneman did, a standard and a culture based in a vision that surpasses what everyone else is slopping through. We are poorer for the loss of Jeff Hanneman, but our best response is to redouble his efforts, and push ourselves forward toward a goal he would respect.