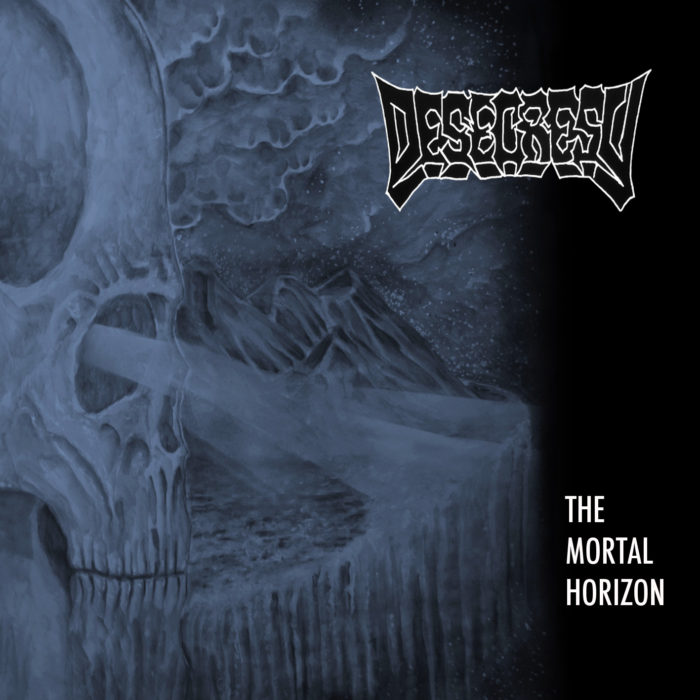 Compared to Desecresy’s prior good work, listeners will  first notice that The Mortal Horizon features much more aggressive but still minimalist percussion. The drumming this time around is almost as if Andy Whale (Bolt Thrower) learned to keep time and decided to put his limited death metal beat repertoire to good use as the punctuating metronomes to black metal compositions. While the drumming isn’t as explosive as Whale, such unhinged percussion would not suit Desecresy’s music. Gronqvist handles the rhythmic catharsis almost like Fred Etsby (Carnage and Dismember). Repeated bursts of blasts and double kick fills sound like the systematic, evenly intervaled bursts of a firing squad at a mass execution.

The main riffing influence on The Mortal Horizon is again the grinding, two chord riffs of mid-period Bolt Thrower. Rather than arranging these grind riffs into the death metal mazes of War Master or the almost heavy metal structures of The IVth Crusade, the chords slowly flow forward in layered narrative cycles as if they were played by Profanatica or Demoncy. Atop these are leads inspired by traditional Finnish death metal (Demigod) and seemingly Summoning, an influence shared by Desecresy’s ultra violent and exemplary contemporary Sammath. Desecresy slowly progresses these black metal leads forward to entrance the listener in narrative cycles of decay leading to sudden death. What results is almost Finnish death metal if written by a minimalist composer like Steve Reich or if the movement had paid attention to the melodic sacrificial rituals of Beherit. This is all for the better.

The Mortal Horizon is not a death metal album of spelunking through mysterious underground caverns containing the hidden ruins of a lost civilization. Desecresy’s ritual of mostly mid-paced, dirgeful dissonant tension that is here cathartically relieved by ritual consonance and percussive attack is like watching a battle-hardened warrior waiting for his chance to methodically and efficiently butcher a dozen foes; a well-disciplined Lone Wolf samurai cutting through the divine test of combat seemingly effortlessly. His strikes are graceful, quick, and explosively visceral for they are all sword forms practiced religiously through Zen to achieve an existential mass slaughter on the battlefield. He does not slog, meander, or try; he just does. Desecresy’s music never struggles despite the absolute darkness. There is only ritual and death.